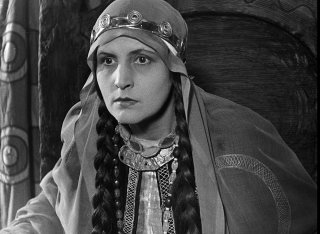 A landmark in Czech cinema, this historical epic is the only film to attempt to reveal the life of the country’s patron saint.
A milestone in Czech cinema history, this silent epic made in 1929 was the most expensive Czech film at that time, with the largest set constructed in Europe to accommodate a cast of over 100, together with 1,000 extras for the lavish battle scenes.
Its team of cinematographers included Jan Stallich (Ecstasy) and Otto Heller, who later worked with Max Ophuls and Laurence Olivier, as well as Michael Caine on The Ipcress File and Alfie. Recalling the work of Griffith and Fritz Lang, Jan S. Kolár’s vast, ambitious production tells the 10th century legend of Václav, Duke of Bohemia (St Wenceslas) who successfully defeated his enemies but was murdered by his own brother. Václav became the patron saint of Czechoslovakia; a famous statue of him at the top of Wenceslas Square in Prague is a national rallying pint.

Accompanied by vocal artists and musicians from Cappella Mariana, a Prague-based early music ensemble specialising in medieval polyphony, this rare and precious screening provides a magnificent celebration of the 100th anniversary of Czechoslovakia.