The British Czech and Slovak Association (BCSA) was launched in the presence of  Alexander Dubček in November 1990 and has been a registered charity since 1995.

Our mission is to disseminate information through a range of events the Association organises, as well as being a signpost to the services provided by other British organisations with Czech and Slovak links.

Over the years the BCSA has organised many events covering a wide range of topics that reflect its charitable purpose. They include talks by or about leading personalities, history, literature, panel discussions, film presentations, book launches and musical recitals. Most take place at the Czech or Slovak Embassies in Notting Hill Gate.

At the end of July 2020, the BCSA held its first webinar. Nick Archer, British Ambassador to the Czech Republic gave his perspective on living through and adapting to Covid-19 conditions.

Members with their families and friends also get together for our two social and fund-raising events.

In June 2019 an informal summer garden party was held in the gardens of the Czech and Slovak Embassies with entertainment from the Morena Slovak Dance Company and music from Pieter Magusin and his friends. We were delighted to welcome a delegation of six Czech officials including senator Tomáš Czernin and Jiří Krátký, special envoy for the Czech expatriate community. The BCSA is most grateful to the Czech Ambassador and the Embassy staff for providing the venue, equipment and a generous supply of roast ham and beer to supplement our regular donation from Budweiser Budvar.

The BCSA also publishes the bi-monthly British Czech and Slovak Review  for its members with in-depth articles, film and book reviews, related events in the UK, coverage of recent developments in the Czech and Slovak Republics and their relations with Britain. We are very grateful for the support of the Office of Foreign Affairs of the Government of the Czech Republic with its production. 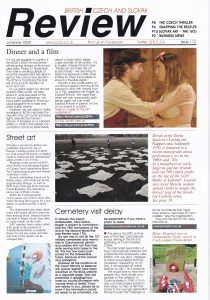 People of many backgrounds join the BCSA including British individuals with an interest in the Czech and Slovak Republics. Some members are former Slovak or Czech citizens who have settled in the UK with their British partners and families. Others are Czech and Slovaks who live, work or study in Britain. Many founder members are former citizens of what was Czechoslovakia who left their country in difficult times.

Our monthly ‘get to know you’ social evenings are an opportunity for BCSA members, supporters and friends to meet. These are held at Bohemia House, West Hampstead – for further details click here.

Each year, the BCSA runs a writing competition for original writing in English on the links between Britain and the Czech/Slovak Republics (at any stage in their history), or describing society in transition in the Republics since 1989. The two winning entries are published in the Review. Entrants do not need to be members of the BCSA.

The School Support Fund was established in 2004 following our experience in helping a Czech and Slovak school affected by floods in 2002 and discovering how this made a difference to their teaching of the English language. Each year a school is selected from a short list provided by the British Council alternating between Czech and Slovak schools. These have included Czech elementary schools in Brno, Ostrov, Plzeň, Tábor and a grammar school in Olomouc; two Slovak elementary schools in Košice, one in Spišské Vlachy, another in Stará L’ubovňa and a grammar school in Sučany.

In 2017 the BCSA made a donation to a school for exceptionally gifted children (Škola pre mimoriadne nadané deti a gymnázium) in Bratislava. The school used our grant to establish an English language library.

In 2019/20 grants were made to two Slovak primary schools for Roma children near Prešov: one in Rokycany that opened in September 2018 with 65 pupils who benefit from a video projector and  the other in Jarovnice, established over 50 years ago, to support its extensive arts activities.