‘1989’ was the suggested (but not compulsory) theme in this year’s BCSA writing competition. It produced a striking range of ways of marking that great anniversary.

The winning entry was A Czechoslovak Odyssey by Slavka Bila. It brings the author £400.

Two entries tied for second place, each winning £150. One was by Martin Hochel, for his essay 1989 – the Transformation of the Czechoslovak Federal Ministry of the Interior. As the title suggests, this describes what happened when the staff in place in this Ministry in the era of normalisation had to cope with the world post-1989. 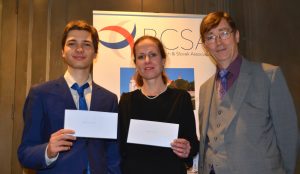 Two of the three winners receiving their prizes at the Association’s Annual Dinner in London on 29 November. They are (from left to right) Martin Hochel, Slavka Bila and Edward Peacock, the competition administrator.

The second runner-up prize goes to Alan Dale, for his story To The Vacillator: A Scythe. This tells of the mental anguish of a worker at a nuclear power plant who is aware of a potentially serious design fault, and what results the events of 1989 bring to him. Both runner-up entries will be printed in future issues of the Review.

There were several other quality and unusual entries. Among these are a number of gripping accounts of the events of November 1989, sometimes hour by hour, as seen by the students and other demonstrators on the streets. Another is a moving memoir of a British man who worked in Czechoslovakia in the 1960s and early 1970s, and what changes he saw in that country when returning after 1989.

One entry reflects on the experience of those Slovak generations that had lived under Communism, and another looks at Slovak history from 1969 up to the time of Brexit through the medium of a mother’s diary. Changes wrought to a quarry symbolise the nation’s changes in a story of a friendship between a young Czech girl and a Slovak boy. Memoirs include one of a young Scot’s time in the Czech Republic in 1997 (and whose first impression of the country was the array of garden gnomes sold by Vietnamese vendors at the border crossing), and another of a cycling Englishman’s tour of eastern Bohemia and Moravia in 1995, including his entry in a road race near Ostrava.

For some reason this year’s entries did not include any from the Far East as in the recent past. As in most years, choosing the winners was difficult. But the judges have managed it. Thank you, judges.

‘1989’ was our suggested theme but was not compulsory. The criteria for all submissions were, as before, that entries should have as their subjects either the links between Britain and the Czech or Slovak Republics (or their predecessor states), or society in transition in the Republics since 1989.

One receiving her prize at the BCSA’s Annual Dinner in London on 29 November Slavka Bila said, “I’m truly grateful to the judges for selecting my work and the British Czech & Slovak Association for running this competition and giving aspiring writers a chance to have their voices heard.

I believe it’s worth preserving stories of communist Czechoslovakia for the next generations. They might talk about events which some could perceive as tied to a specific and bygone era, yet they continue to reveal truths about human existence. This makes them universal and relevant.”

We shall be running the competition again in 2020. The terms and conditions will probably be the same as in 2019. The suggested theme has not been decided yet, but will be announced in due course. For more information or to express interest write to me at prize@bcsa.co.uk or 24 Ferndale, Tunbridge Wells, Kent, TN2 3NS.

Let me make my usual plea – if you’re entering, do please read the guidelines! Please don’t let your entry be disqualified (no matter how well written) because it doesn’t deal with the prescribed subjects. That said, enjoy the writing!